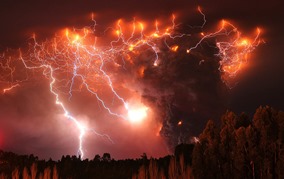 An extinction event known as the ‘Great Dying’ wiped out most of the life on Earth 251 million years ago.
It was a die-off of apocalyptic proportions – a period of around 60,000 years that saw the disappearance of 70% of the planet’s land species and more than 90% of all marine life.
For years scientists believed that the primary cause of this mass extinction event was a devastating volcanic eruption originating in Siberia which spewed out 1.4 million cubic miles of lava, but now it appears that the volcano might not have been the lone culprit in wiping out such a large percentage of all life on Earth.
Researchers analyzing boron embedded in ancient limestone from the Permian and Triassic periods discovered that a significant increase in ocean pH levels had occurred at around the same time as the mass extinction event – most likely due to an increase in carbon dioxide in the atmosphere.
This extra acidity would have spelt doom for a large percentage of all marine life and would have wiped out most of the prehistoric sea monsters that dominated before the age of the dinosaurs.
Life on Earth took longer to recover from this event than from any other extinction in history.
“I think it might be a massive warning and a worst-case scenario, if we carry on with fossil fuels,” said lead study author Matthew Clarkson. “Diversity didn’t recover for 5 million years.”