Antibiotics in Meat on the Rise Worldwide, Especially Bacon 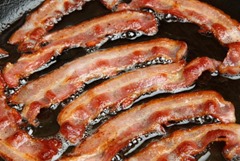 In the next 15 years, countries around the world will see a major increase in antibiotic use in livestock, a new study finds.

“The invention of antibiotics was a major public health revolution of the 20th century,” said senior author Ramanan Laxminarayan, a senior research scholar at the Princeton Environmental Institute and director of the Centre for Disease Dynamics, Economics and Policy. “Their effectiveness – and the lives of millions of people around the world – are now in danger due to the increasing global problem of antibiotic resistance, which is being driven by antibiotic consumption.”

The study was done by researchers at the Centre for Disease Dynamics, Economics and Policy, Princeton University, the International Livestock Research Institute and the Université Libre de Bruxelles.

One of the major reasons farmers are having to use more and more antibiotics is that demand for meat is going up, and animals are often subjected to smaller and smaller living quarters, where disease can spread.

The study is published in the journal Proceedings of the National Academy of Sciences.