Home / Health / Are Pacific Islanders too Poor to be Thin?

Are Pacific Islanders too Poor to be Thin?

Are Pacific Islanders too Poor to be Thin? April 18, 2015 Tautai
Health
Comments Off
HealthNutrition

When it comes to being overweight or obese, the causes and remedies are far more complex than they might at first appear. Anna Soubry, Britain’s minister for public health, found herself isolated by audience members and fellow panelists when in 2013 she dared to say that in Britain you are more likely to be fat if you are poor than if you are rich. She was accused of ‘stigmatising the poor’. 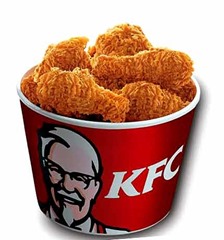 As Cassandra writes for the Economist: if you go to big cities anywhere in the developed world this phenomenon is clearly visible: more poor people waddling around than is the case for their wealthier (and usually better educated) contemporaries. This was not always the case, in the not too distant past there were far fewer fast-food outlets and now they are everywhere. Her conclusion was: “junk food is cheap, so the poor eat junk food” and as a result “the poor become fat”.

Two-thirds of American adults are overweight. This is defined as having a body mass index (BMI, a common measure of obesity) of 25 or more, which for a man standing 175cm (5’9”) tall means a weight of 77kg (170 pounds) or more. Alarmingly, 36% of adults and 17% of children are not just overweight but obese, with a BMI of at least 30, meaning they weigh 92 kg or more at the same height. If current trends continue, by 2030 nearly half of American adults could be obese (see article by Charlotte Howard Special Report on Obesity in the Economist).

The rest of the world should not scoff at Americans, because belts in many other places are stretched too, as shown by new data from Majid Ezzati of Imperial College, London, and Gretchen Stevens of the World Health Organisation (WHO). In Britain 25% of all women are obese, with men following close behind at 24%. Czech men take the European biscuit: 30% are obese.

And it is not just the rich world that is too big for its own good. The world’s two main hubs for obesity are the Pacific Islands and the Gulf region. According to Forbes, Pacific island nations and associated states make up the top seven on a 2007 list of fattest countries, and eight of the top ten. In all these cases, more than 70% of citizens age 15 and over have an unhealthy weight.

Not long ago the world’s main worry was that people had too little to eat. Malnourishment remains a serious concern in some regions: some 16% of the world’s children, mainly in sub-Saharan Africa and South Asia, were underweight in 2010. But 20 years earlier the figure was 24%. In a study of 36 developing countries, based on data from 1992 to 2000, Barry Popkin of the University of North Carolina found that most of them had more overweight than underweight women. 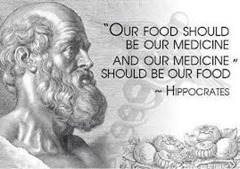 The clearest explanation of this extraordinary modern phenomenon comes from a doctor, an islander from Greece, in the 5th century BC. “As a general rule,” Hippocrates wrote, “the constitutions and the habits of a people follow the nature of the land where they live.” Men and women of all ages and many cultures did not choose gluttony and sloth over abstemiousness and hard work in the space of just a few decades. Rather, their surroundings changed dramatically, and with them their behaviour.

Much of the shift is due to economic growth. BMI rises in line with GDP up to $5,000 per person per year, then the correlation ends. Greater wealth means that bicycles are abandoned for motorbikes and cars, and work in the fields is swapped for sitting at a desk. In rich countries the share of the population that gets insufficient exercise is more than twice as high as in poor ones.

These global changes react with local factors to create different problems in different regions. Counter-intuitively, in some countries malnutrition is leading to higher obesity rates. Undernourished mothers produce babies who are predisposed to gaining weight easily, which makes children in fast-developing countries particularly prone to getting fat. 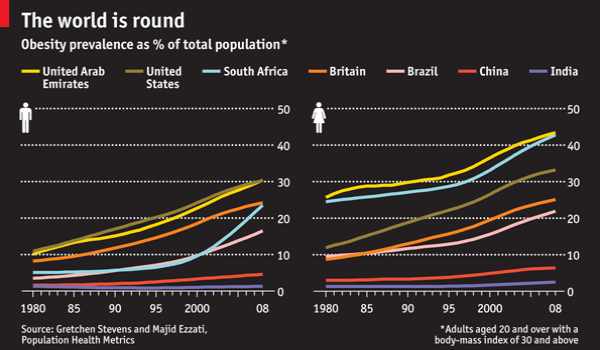 Reasons are not Clear

Reasons for the epidemic are not entirely clear. While development has increased wealth enough to allow access to imported foods, the foods coming in are cheap, of low quality and high in calories but low in micro-nutrients. It seems the region has only achieved enough wealth to climb to the bottom rung of the industrial food ladder.

Historically, food was imported from Australia and New Zealand, but now it comes from much further afield: China, Malaysia and the Philippines. Nutrition labels are inconsistent, often not in English (the common language spoken in most Pacific island countries) and are sometimes lacking important information altogether.

Other factors include urbanisation and mining operations that have left not much arable land. As a result, much of the local diet is of processed, imported food such as noodles, sweets, spam or corned beef, rather than fresh fish, fruit and vegetables. In addition, cultural factors have been blamed, such as associating a large body size with wealth and power, or changing ways of living, with children leading more sedentary lives.

“Due to urbanization, more people are living in more dense environments, in cities where they are removed from traditional food sources and dependent on an industrial food supply,” says Neville Rigby, director of policy and public affairs for the International Association for the Study of Obesity. Modernization is causing countries with small populations and few resources to depend on imported, often over-processed food. “The Western diet overwhelms, and many people are not genetically engineered to cope with this,” says Rigby.

“Obesity has become a problem of poverty,” says Daniel Epstein of the WHO Regional Office of the Americas. “Poor people have an easier time of eating junk food. People fill up on things that have a high caloric value but little nutritional value.”

Micronutrient deficiencies are common in the Pacific Region. In 15 of 16 countries surveyed, more than one fifth of children and pregnant women were anaemic. In Fiji, Papua New Guinea and Vanuatu, iodine deficiency and related goitre are endemic although, in Fiji and Papua New Guinea, great progress was made recently through salt iodization. In many other Pacific countries and territories the situation is yet to be assessed. Vitamin A deficiency is also a significant public health risk in Kiribati, the Marshall Islands, the Federated States of Micronesia (FSM) and Papua New Guinea (PNG).

It sounds strange, but people are starving themselves into obesity. Our bodies crave the nutrients found in healthy foods. But if you eat food that’s missing those vital nutrients, you’ll just keep craving more food. Unfortunately, our food supply is sorely lacking micronutrients, the vitamins and minerals we need to live healthy lives. Even fresh fruits and vegetables are a lot less nutrient-rich than they were a couple of generations ago. Micronutrient deficiency can lead not only to obesity but a whole host of other health problems. See here.

A new study from Oxford University may have determined why residents of Nauru and the Cook Islands have such high rates of obesity. According to the study, we can blame that on the islands’ colonization, which led to significant lifestyle changes among residents, especially when it came to their diets.

Costs of Obesity: A Huge Problem

Many cultures used to view a large girth with approval, as a sign of prosperity. But obesity has costs. It lowers workers’ productivity and in the longer term raises the risk of myriad ailments, including diabetes, heart disease, strokes and some cancers; it also affects mental health. In America, obesity-related illness accounted for one-fifth of total health-care spending in 2005, according to one paper.

About 40% of the Pacific island region’s population of 9.7 million has been diagnosed with a non-communicable disease (NCD), notably cardiovascular disease, diabetes and hypertension. These diseases account for three quarters of all deaths across the Pacific Region and 40–60% of total health-care expenditure, according to a meeting on obesity prevention and control strategies in the Pacific held in Samoa back in September 2000. In Fiji, strokes used to be rare in the under 50s, whilst doctors reported that they had become common amongst patients in their 20s and 30s. The nation with the highest rate of adult diabetes is Nauru, where nearly 31% of the population is struck with the disease, according to the International Diabetes Federation.

A new global health study, led by Christopher Murray of the University of Washington, shows that since 1990 obesity has grown faster than any other cause of disease. For women a high BMI is now the third-largest driver of illness. At the same time childhood mortality has dropped and the average age of the world’s population has risen rapidly. In combination these trends may mark a shift in public-health priorities. Increasingly, early death is less of a worry than decades spent alive and sick.

For the Pacific life expectancy data make clear the urgent need for action. The average age at which people develop diabetes and cardiovascular disease is getting lower. In Fiji, only 16% of the population is aged more than 55 years due to premature deaths primarily caused by NCDs, says Dr Temo K Waqanivalu, technical officer for nutrition and physical activity at the Office of the WHO representative for the South Pacific in Suva, Fiji.

It is plain that obesity has become a huge problem, that the factors influencing it are fiendishly hard to untangle and that reversing it will involve difficult choices. Radical moves such as banning junk food would infringe individuals’ freedom to eat what they like. Instead, some governments are cautiously prodding their citizens to eat less and exercise more, and food companies are offering at least some healthier foods.

Increasing the proportion of locally grown, nutritious and less energy-dense traditional foods in the diets of Pacific islanders is essential. “We are also challenging our own agriculture and fishing sectors to strike a balance between local supply and commercialization. There have been ‘go local’ campaigns in FSM and other countries to promote local foods,” says Waqanivalu. “Promotion of traditional foods has fallen by the wayside. They are unable to compete with the glamour and flashiness of imported foods,” he says.

In a few places obesity rates seem to be levelling, but for now waistlines in most countries continue to widen unabated. Jiang He and his colleagues at Tulane University have estimated that by 2030 the global number of overweight and obese people may double to 3.3 billion. That would have huge implications for individuals and governments, and the answers are going to be complex and require huge changes in thinking. 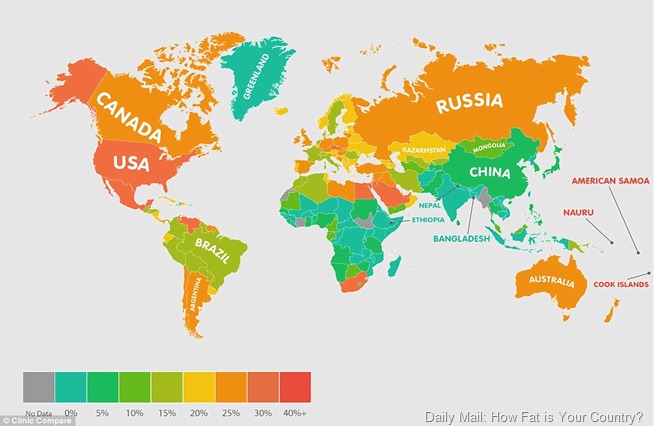