Home / News / Do Toxins in Seafood Cause ALS, Alzheimer’s & Parkinson’s?

Do Toxins in Seafood Cause ALS, Alzheimer’s & Parkinson’s? 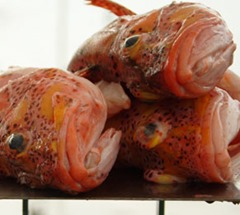 What started as the discovery of an unknown disease in Guam has spread to a line of ominous findings about some of our most debilitating conditions and potential toxins lurking in bodies of water around the world.

Elijah Stommel, a neurologist at the Dartmouth-Hitchcock medical center in New Hampshire, often has to deliver bad news to his patients, but there is one diagnosis he particularly dreads. Amyotrophic lateral sclerosis, or ALS, kills motor neurons in the brain and spinal cord, progressively paralyzing the body until even swallowing and breathing become impossible. The cause of ALS is unknown. Though of little solace to the afflicted, Stommel used to offer one comforting fact: ALS was rare, randomly striking just two of 100,000 people a year.

Then, a couple of years ago, in an effort to gain more insight into the disease, Stommel enlisted students to punch the street addresses of about 200 of his ALS patients into Google Earth. The distribution of cases that emerged on the computer-generated map of New England shocked him. In numbers far higher than national statistics predicted, his current and deceased patients’ homes were clustered around lakes and other bodies of water. The flurry of dots marking their locations was thickest of all around bucolic Mascoma Lake, a rural area just 10 miles from Dartmouth Medical School. About a dozen cases turned up there, the majority diagnosed within the past decade. The pattern did not appear random at all. “I started thinking maybe there was something in the water,” Stommel says.

That “something,” he now suspects, could be the environmental toxin beta-methylamino-L-alanine, or BMAA. This compound  is produced by cyanobacteria, the blue-green algae that live in soil, lakes, and oceans. Cyanobacteria are consumed by fish and other aquatic creatures. Recent studies have found BMAA in seafood, suggesting that certain diets and locations may put people at particular risk. More worrisome, blooms of cyanobacteria are becoming increasingly common, fueling fears that their toxic by-product may be quietly fomenting an upsurge in ALS—and possibly other neurological disorders like Alzheimer’s disease and Parkinson’s as well.

The stakes are so high that 21 research teams from 11 countries are now investigating the potential dangers of BMAA. “One group has vociferously denied the hypothesis,” says Walter Bradley, a neurologist and leading authority on ALS at the University of Miami Miller School of Medicine. “But more scientists are realizing this is a viable hypothesis, and papers on the topic are beginning to snowball.” ﻿

Hints about the potential health threat of BMAA stretch back half a century to the remote Pacific island of Guam. There, in the aftermath of World War II, U.S. Army physicians encountered an outbreak of a strange syndrome that the native people called lytico-bodig—the term lytico signifying paralysis and bodig dementia. Some victims had ALS-like symptoms, others exhibited the rigid posture of Parkinson’s disease, and still others displayed the mental fogginess typical of Alzheimer’s.

An American team headed by neurologist Leonard Kurland of the Mayo Clinic determined that the highest incidence of lytico-bodig occurred in Umatac, an enclave of thatch-roofed huts on Guam’s southern coast. At  the peak of the epidemic, in the 1950s, almost every household in the village had at least one afflicted member. The island’s indigenous people, the Chamorros, were heavily affected. Filipinos who had immigrated to Guam and adopted native customs also developed the disease at high rates, but typically only if they had lived on the island for at least 10 years. That pattern suggested an infection with a long incubation period or a toxin that accumulated over time.

Medical researchers from around the world flocked to Guam, hoping that lytico-bodig would provide a window into the broader mysteries of neurodegenerative disease. They quickly zeroed in on a distinctive component of the diet in Umatac, primitive palmlike plants called cycads, whose seeds were ground into a flour that the Chamorros made into tortillas.﻿ ﻿Perhaps some compound in the cycads was to blame.

In the 1960s, British biochemists Arthur Bell, Peter Nunn, and Armando Vega of King’s College analyzed cycad seeds and focused on a compound in them, BMAA. What drew their attention was its molecular structure: BMAA resembles beta-oxalylamino-L-alanine (BOAA), a substance found in Asian chickpeas that is known to cause a paralyzing disease. Test-tube experiments showed that BMAA can kill motor nerve cells in the spinal cord, the very ones destroyed by ALS. More evidence came from a study of monkeys fed high doses of the compound. The monkeys began to move more slowly and to tremble, and their faces froze in a masked expression, mirroring some of the symptoms of lytico-bodig. On autopsy, moreover, the animals’ brains showed damage to motor neurons.

Those findings initially fed hopes that science had nabbed a brain- ravaging killer. Other researchers raised doubts, however. Neuroscientist Mark Duncan of the National Institutes of Health pointed out that enormous doses of BMAA had been required to produce symptoms in the monkeys. A Chamorro, he calculated, would have to eat almost a ton of cycad flour per month to get an equivalent dose. It was unfathomable how the toxin could be consumed in such high amounts on Guam. No other plausible causes of lytico-bodig turned up. By the early 1990s, the epidemic was in decline and the trail of clues had grown cold.

Just when research seemed to have come to a dead end, the issue was revived by Paul Cox, then the director of the National Tropical Botanical Garden on the Hawaiian island of Kauai. As part of his research there, Cox studied bats, and that work led him to a flash of insight. He noted that the Chamorros of Guam liked to eat a local fruit bat, to such an extent that the animals had been hunted to near extinction by the late 1980s. Cox was intrigued by the diet of those bats: They feasted on cycad seeds. He proposed that BMAA had become concentrated, or biomagnified, in the bats to levels many times higher than those found in cycad flour. Among people who regularly ate fruit bats, he hypothesized, the cumulative dose of BMAA might have been sufficient to inflict brain damage. Moreover, the increasing scarcity of fruit bats﻿ (specifically, the kind called flying foxes﻿) on Guam might explain why the outbreak of lytico-bodig had petered out.

Best known for discovering prostratin, an anti-AIDS drug derived from the mamala tree of Samoa, Cox was well respected in ethnobotany, but veterans of the Guam epidemic regarded him as a newcomer unlikely to succeed where the giants of neuroscience had failed. That did not stop him from trying. Enlisting the help of Sandra Banack, an expert on Pacific bats at California State University, Fullerton, Cox tested three specimens of fruit bat collected on Guam in the 1950s, at the height of the epidemic. In 2003 they published the results. All of the bats were chock-full of BMAA.

Cox then set about getting brain tissue samples collected during autopsies of six Chamorros who had died of lytico-bodig. He compared those samples with brain tissue taken from 15 Canadians, two who had died of Alzheimer’s and 13 with no signs of neuropathology before death. He contacted Susan Murch, a biochemist at the Hospital for Sick Children in Toronto and an expert in finding biomolecules in human tissues, to test the samples in a double-blind study. All six of the Chamorros’ brains contained BMAA. Stunningly, so did the two Alzheimer’s brains from Canada, while the 13 controls had not a trace. “Suddenly, this was not a story about a remote people on a small island,” Cox says… Read more here.