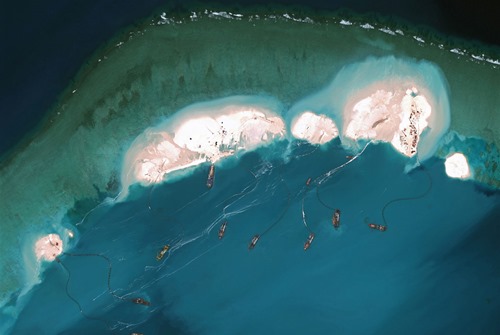 New islands of white sand have appeared in the South China Sea.

But while islands typically rise up because of volcanic activity, these pieces of land are being built up by Chinese dredgers dumping sand onto a coral reef.

The work happens to be taking place in disputed international waters around the Spratly Islands, on the appropriately named Mischief Reef. China has long claimed ownership of the archipelago, which is strategically important and thought to be rich in oil and gas, but so do the Philippines and Vietnam.

The satellite image on the bottom right, captured on 16 March, shows the extent of artificial land that has sprung up. The building work is thought to have been carried out in record time, because surveillance photos snapped in October showed no sign of reclamation efforts, according to Reuters.

It’s not the first time that China has tried this strategy: just last year terrain was built up around another reef in the Spratlys, possibly as a site for an airstrip.

Further afield, China is trying to claim the Senkaku islands in the East China Sea, also located close to potential oil and gas reserves. The uninhabited islands are legally owned by Japan.