Dredging has been on-going now for almost 5 weeks (begun on 29th April 2015), with all dredging to date concentrated in the area between Site 1 and Site 2 near the northern end of Tegako islet. Monitoring of corals has been carried out since 21st April (almost 6 weeks).

The coral watch results for the week of 25-29th May 2015 (latest 3 bars on each graph above) shows on-going low-level bleaching of corals at the two sites closest to the dredging, and which started about 3 weeks ago.  Bleaching has been much higher at the current un-dredged sites (Catalina Patch Reef and South End of Fogafale). The bleaching observed at South End has shown significant recovery over the past 1.5 weeks, while that at Catalina Patch it remains high.

The corals at the two dredging locations remain bleached, but not to levels of concern and the trigger criteria have not be reached. Bleaching at Site 3 Catalina Patch, a current control, remains high but is not likely to be related to dredging. The high levels of bleaching at Site 3 is likely to be due to other factors (e.g. pollution adjacent to the main urban area). Recovery at Site 4 South End shows how quickly bleaching status can change. 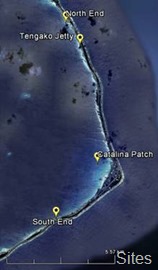 A total of 80 corals of 4 species of Acropora are being monitored: Acropora florida, A. nobilis, A. hyacinthus and A. cytherea. This includes 2 branching and 2 plating species commonly found growing on lagoon reefs in Funafuti.

The survey is being undertaken at 4 sites along Fogafale and Tegako, with coral measurements being recorded 3 times per week on Mondays, Wednesdays and Fridays. After each survey data are entered into a purpose-built database from which push-button instantaneous graphs (see main results above) can be generated. The bars in the graph are a breakdown for each of the average bleaching levels for the corals, with a perfect coral 100% at level 6 (darkest) and a totally bleached coral 100% at level 1 (white). The colours used in the chart mirror real corals and also the scale for D coloured corals in the Coral Watch Chart below. In the period 28-29 April corals showed ‘normal’ levels of bleaching at all sites: around 1% bleaching at level 1, and the rest of the coral at unbleached level 6 in the Coral Watch chart (healthy condition).

The trigger for action should bleaching threaten the condition of ecosystems includes the following criteria: 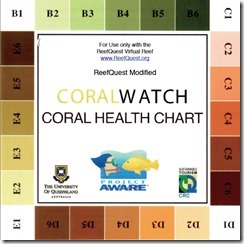