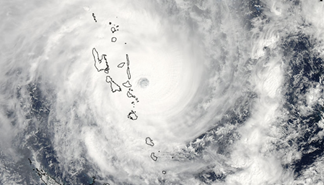 The monster Category 5 storm, which brought wind gusts of 270-300 km/h and devastated Vanuatu might prompt the creation of a new Cyclone Category 6.

Atmospheric researchers tend to agree that tropical cyclones of unusual ferocity are coming this century, but the strange fact is that there is no consensus to date on the five-point scale used to classify the power of these anticipated storms.

The lack of an upper limit on the scale results in all of the most intense tropical cyclones getting lumped together, despite their wide range of power. Category 5 becomes less descriptive when it includes 2005’s Emily, which reached peak wind speeds of 257.5 kph (160 mph) and six hours in category 5; the same year’s Katrina which held peak wind velocity of 280 kph (175 mph) for 18 hours in the category; and 1980’s Allen, churning with peak winds at 305 kph (190 mph) maintained for 72 hours in the highest category.

“We may have to invent a category 6,” says David Enfield, a senior scientist at the University of Miami and former physical oceanographer at the U.S. National Oceanic and Atmospheric Administration (NOAA). This new level wouldn’t be an arbitrary relabeling. Global satellite data from the past 40 years indicate that the net destructive potential of hurricanes has increased, and the strongest hurricanes are becoming more common—especially in the Atlantic. This trend could be related to warmer seas or it could simply be history repeating itself. Data gathered earlier than the 1970s, although unreliable, show cycles of quiet decades followed by active ones.

Jonathan Nott, a professor at James Cook University and expert on cyclone history, said there has “been a lot of discussion over the last 5-10 years” about the need to extend the cyclone severity rating beyond the current maximum of five. 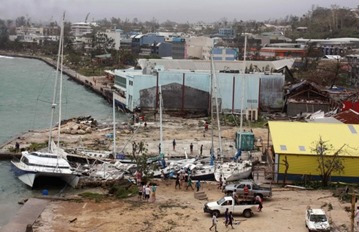 According to the New Zealand’s MetService, satellites indicate  Cyclone Pam was rated rated a Category 5 “super cyclone”, with pressure in its eye dipping as low as 890 hectopascals (hPa), said Emma Blades, a meteorologist with the service.

Cyclone Pam was “certainly one of the biggest storms to occur in the South Pacific”, Kevin Walsh, an associate professor at Melbourne University, said. “It’s extremely rare for us to get tropical cyclones with central pressures in the South Pacific less than 900 hPa.”

Australia’s Bureau of Meteorology lists category-5 as its highest severity for a tropical cyclone. To warrant such a rating, maximum mean wind speeds must top 200 km/h with a central pressure of less than 930 hPA. Based on the differences between category-3 and -4 cyclones, a category-6 cyclone would signal mean wind speeds of about 240 km/h or stronger, with a central pressure of less than 915 hPa. Cyclone Pam may have exceeded both measures. However, Blair Trewin, a senior bureau climatologist, said there was no plan for the agency to extend its cyclone categories.

Meteorologists typically infer wind strength and pressure from analysis of satellite images of clouds and the shape of the eye of the storm, rather than direct measurement. Engineers also examine damage in the wake of the event, such as signs buckled by the winds, to estimate a storm’s ferocity.

The physical processes that lead to a cyclone forming also tend to limit its intensity. Storms draw their strength from warm sea-surface temperatures, but the resulting churn of the waters and accompanying rain helps to cool conditions, particularly if the cyclone is relatively stationary. Similarly, the faster the winds of cyclone spin, the more friction they produce, particularly when the storm makes landfall.  “Ultimately, the amount of energy lost through friction from wind speeds starts to become greater than the energy gained from evaporation and condensation,” Professor Nott said. However, there is evidence that climate change will increase the maximum potential intensity of cyclonic events by increasing the warmth available to be tapped from the oceans. “That will be one factor that will allow cyclones to become more intense in the future,” Professor Nott said. Another issue is that the tropical region where cyclones can form is expanding north and south of the equator. “We’ve got evidence already that this is happening,” he said.

A decade ago, US scientists began discussing whether the Atlantic hurricane gauge needed to be extended beyond its top category, also a five, after a season of particularly strong events. “Maybe with the increasing frequency of these extreme events, there will be a more lively discussion of whether we should have a cat-6 or not,” Professor Nott said. In the case of Cyclone Pam, Professor Nott said the worst of the storm missed Port Vila, with islands to the south, such as Eromango, likely to have received a direct hit. “It may well have had full-on high Category 5 conditions,” he said. “In a category-5 cyclone there aren’t any leaves left on the trees and the trees themselves are not standing.”

Tropical systems are officially ranked on one of several tropical cyclone scales according to their maximum sustained winds and in what oceanic basin they are located. Only a few scales of classifications are used officially by the meteorological agencies monitoring the tropical cyclones, but some alternative scales also exist, such as Accumulated cyclone energy, the Power Dissipation Index, the Integrated Kinetic Energy Index, and Hurricane Severity Index.

CATEGORY 1 (tropical cyclone) Negligible house damage. Damage to some crops, trees and caravans. Craft may drag moorings. A Category 1 cyclone’s strongest winds are GALES with typical gusts over open flat land of 90 – 125 km/h. These winds correspond to Beaufort 8 and 9 (Gales and strong gales).