Germany has become the FIRST country in the world to decide it no longer wants to grind up millions of live baby chicks — the disturbing ‘waste product’ of the worldwide egg industry. 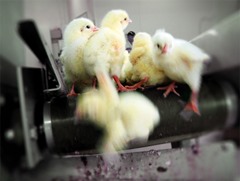 ‘Chick disposal’ is something the egg industry doesn’t like to talk about. And is it any wonder? It’s hard to imagine eggs selling like hotcakes if carton packaging included pictures like this.

It’s the brutal reality of commercial egg production: millions of tiny male chicks ground up alive or suffocated every year because they don’t lay eggs. These little guys aren’t considered ‘commercially viable’ to be raised — afer all, they’ll never lay eggs, and they’re not suitable to be raised for meat.

That half of all chicks born into the egg industry are male poses an enormous ethical issue — not to mention a potential public relations problem for the the egg industry. But finally, there may be hope on the horizon that this brutal practice could come to an end.

Scientists and animal rights campaigners have teamed up in Germany to come up with an alternative option to the mass-slaughter of the 45 million male chicks born into the country’s egg industry each year. New technology looks set to determine the sex of each fertilised egg before the chick inside develops — enabling the removal of all male-identified eggs from the hatchery, and leaving only the female eggs to hatch. Germany’s Agriculture Minister, Christian Schmidt, has advised that ‘chick shredding’ could be a thing of the past in Germany by 2017 — making it the first country in the world to stop the practice.

If Germany can pull it off, what’s stopping everyone else? 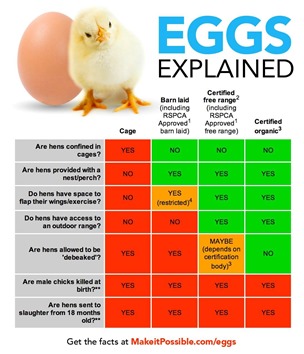 Millions of tiny chicks are ‘disposed of’ every year in Australia — and while caring people would never condone this ruthless treatment of vulnerable babies, most people have no idea it’s even going on. Though it may not surprise you to hear that this is perfectly ‘normal’ in the caged egg industry (the same one that continues to defend the use of cruel battery cages) — the tragic reality is that the slaughter of male chicks is standard across all types of commercial egg farming — free range included.

But while the Aussie egg industry considers this callous treatment of day-old chicks ‘normal’ — you don’t have to accept it.