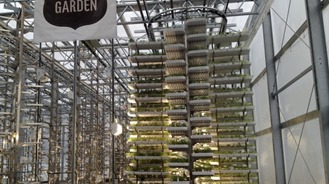 Newark, the largest city in the state of New Jersey, is about to be home to the world’s largest indoor vertical farm. The project will cost approximately 30 million dollars, and will be sponsored by a couple of major investment groups, the RBH group being one of them.

AeroFarms will be running the show, they are a company that grows leafy greens in indoor, urban facilities. The site is a 69,00 square foot converted steel factory, and once it’s completed it is estimated that the facility will be able to produce approximately two million pounds of green vegetables and herbs every year.

“Newark is increasingly becoming a destination city for high-tech and environmentally-friendly commerce, and this $30 million project in the East Ward will bring jobs and prosperity to our city, It will also expand the role of urban farming and locally-produced vegetables in our city. This will provide greater access to healthy and inexpensive food choices for our residents, helping them live healthier lifestyles.”  Newark Mayor Ras Baraka

What Is A Vertical Farm?

This type of building is popping up in different areas of the world as the idea promises new, rapid, and environmentally friendly ways to feed growing populations. The first commercial vertical farm was built in Singapore by Jack Ng, an entrepreneur looking to supply food to Singapore’s densely populated city without having to buy a lot of highly priced land around the city. His vertical farm method is energy efficient and simple, and it mixes some ancient practices with new ones. The tower is modern and clear, so it looks great and allows sunlight into the the building for the plants. The produce grown in the building is sold under the name SkyGreens. You can find out more about how this vertical farm works in the video below.

It would be great if all major cities could start building these.