Africa’s Biggest Lake Is On The Verge Of Dying

Africa’s Biggest Lake Is On The Verge Of Dying April 4, 2015 Tautai
News
Comments Off
EnvironmentFish

It’s surrounded by three countries and depended on by 35 million people for survival, but Africa’s largest lake is under threat of extinction.

Lake Victoria covers more than 68,800 square km and is the lifeblood for the people of Tanzania, Kenya and Uganda who rely on its waters to service its huge fishing industry. But pollution, over fishing and ecological destruction have many worried about an environmental catastrophe.

Fishermen are depleting the fish stocks and crippling the life of the river.

Reported in Slate, the history of Lake Victoria is a fascinating one. It was the site of a fishing boom in the 1980s and 90s when the world paid huge money for its Nile perch and tilapia fish. People flocked to the area to claim a part in the economic boom but it changed the landscape.

The fish for which it is famous have had their breeding grounds destroyed by pollution and illegal fishing methods such as the use of gillnets (vertical panels of netting), beach seines (nets deployed from the shore) and plastic fishing lines, that capture pretty much anything, have depleted its waters.

According to the Food and Agricultural Organisation (FAO) of the United Nations the average weight of Nile perch caught fell from 50kg in the 1980 to less than 10kg today.

Agricultural run-off has led to serious pollution and disease. 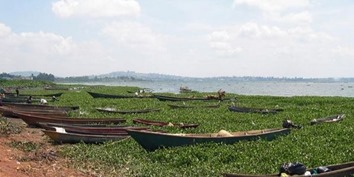 Then there is the issue of pollution. Thousands of tonnes of sewage and industrial waste flow into the lake every year. The shallow waters favoured by the Nile perch for breeding have been hard hit by agricultural and industrial run-off, escalated by deforestation.

This toxic run-off has triggered the invasion of a plant species known as the water hyacinth. This prolific weed has started to cover the lake, depleting the waters of oxygen and raising the toxicity levels for fish.

Water hyacinth makes it hard for the boats to get to shore and is bringing disease to the waters.

LVFO says the lake produces $640 million worth of fish a year and now that industry is under threat. Researchers blame governments and national agencies for failing to control the effluent and waste that pours into the waters everyday. And despite laws placed on the size of fish caught and methods of catching, they remain largely unregulated..

What will happen to the millions affected by the lake’s decline?