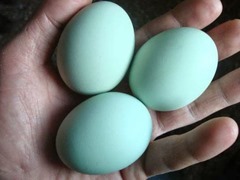 Egg-laying chicken breeds all come with stories on the number of eggs the hens will lay in a year – but how well does that reflect reality? Especially on an atoll. In this article, we are going to find out what you can expect from your backyard chickens.

The Six Chicks Project started back in late 2014 with the arrival on island of the first Hy-line brown commercial layers from Fiji. However, we never intended to breed those as it would have to be under license to the company that produces them. Since that time, we managed to bring in Australorps, Araucanas (actually Easter Eggers, or EEs) and a single Light Sussex hen, as well as a few Anconas. Out of those breeds we now have small breeding groups of Australorps (in blue and black) as well as Araucanas and chick production is going well.

Throughout the project we have kept careful records of every single egg laid by our hens since 22nd April 2015. And because the breeds are kept separately (to keep them pure for breeding) the egg data are also separate, so we can compare the real production of each breed. Since April 2015 our chickens have produced a total of 3,142 eggs, with a total combined weight of 169.8 kg. All these eggs were produced by different numbers of hens over time, but averaged 4 Australorps, 4 Araucanas, 7 Hy-lines and 1 Light Sussex. The Hy-lines were the only producers between April 2015 and April 2016, and since then all breeds have been producing.

For all breeds initial egg production was slow, with small eggs, and took 1-3 months to improve and get up to good levels of production. In our investigation Hy-lines were considered the benchmark, because they are commercial egg-layers reputed to lay 330 eggs per hen per year. If the heritage breeds could produce in similar amounts to them, we could be pleased with the levels of production. 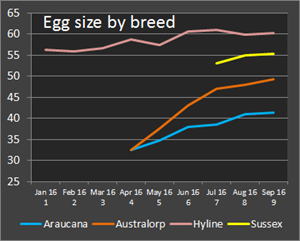 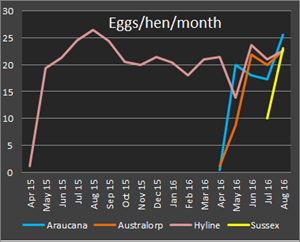 The left graph shows pretty large differences in the sizes of the eggs being produced by each breed. It also shows that egg sizes started a lot smaller than they are now. Current egg sizes for the Hy-lines are around 60g, though they started at around 55g. In contrast, the Australorps and Araucanas began their egg-laying careers with eggs at around 33g and took at least 3 months to get up to current egg sizes. This negatively affected hatch rates of the eggs which we started incubating after 2 months of laying. The hatch rate began at 50% and has now climbed to about 76%. Our Light Sussex hen, who cannot be used for breeding as we did not get a rooster for her, started out with 41g eggs and is now producing eggs that are 55g in size. These relative differences in egg size are likely to persist, even though we expect the eggs to be larger all round after the first moult. Araucana eggs, with their beautiful blue shell colour will always be a bit smaller than Australorp eggs.

The right graph shows the number of eggs being laid, on average, per hen per month. Of course the Hy-lines got started a year earlier than everyone else and there was 1-2 months between the first egg and the time that production got up to speed. By August 2016, the number of eggs per hen per month was the same for Hy-lines, Australorps and the Light Sussex hens at 23 eggs per hen. The stars of the show are the Araucanas with 26 eggs per hen per month, despite their being a bit smaller. However, it is likely that the Araucana peak we are seeing now could decline as the hens age. In August 2015 the Hy-lines were also laying 26 eggs/hen/month !

So how did we go?

Both the Australorps and Araucanas are performing very well in Funafuti and are excellent layers. They are laying as many eggs as the commercial birds are able to here on an atoll. Under commercially controlled conditions the Hy-lines should be laying around 27-28 eggs per bird per month. The egg sizes are, however, smaller than the Hy-lines for all breeds. You can expect the smallest eggs from the Araucanas, which is understandable, since they are also smaller birds.

It costs around $5 per month to feed a grown hen with purchased food, and she can produce $11.50 worth of eggs (assuming 50c per egg as sold in Funafuti). If you feed your birds scraps, fish, coconut and grass, you can reduce that food bill, perhaps to zero, depending on availability of scraps and the work you are willing to do. We have not bought a single egg since April 2015 and we eat lots of them. Beautiful, fresh, organic eggs. What are you waiting for?