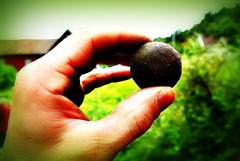 Why would you go for seven per cent when you can get 50 to 100 per cent increases in yield without having to use genetically modified seeds?

The South Australian Agriculture Minister has just reported “amazing” results after trialling a new soil program. Minister Leon Bignell describes using technology that works with the soil and other organic matter. This type of innovation, that he calls an “evolution in science” abounds over genetic engineering, he said.

The results of the following trial experiment strengthened his view that a moratorium on GM technology should remain indefinitely as it proves that GMOs are not needed. Incidentally, this year’s government test run was called “New Horizons” and some of the trial sites boasted a 300% increase in yields.

Minister Bignell – who has stood with protesters against GM technology – said of the upgraded ag technique:

Instead of using the top five centimetres of the soil, you go down to 50cm or even deeper.

You put clay in it when it’s needed, you put organic matter where it’s needed as well.

He told bignell/6325276″>ABC (Australia) of his return from China where they appreciate South Australia’s GM-free status. He calls it the way of the future and a way to increase the value of their production.
Even though he’s received pressure to lift the ban and use the GM tech for weeds and pests, he doesn’t believe that’s the solution. He moves forward with vigour when he gets accused of being “left behind” – a favorite term of elites pushing an agenda.

“The public in most places of the world aren’t convinced” about GM technology,” he said. He proudly sees being GMO-free as forging ahead and entering new markets.

Apparently, a bulk of the pressure is coming from State body Grain Producers SA who say they should be able to choose their products and they are not seeing monetary benefits to Bignell’s plans yet. Under Bignell’s lead, the right to choose does not include untested GM tech, chemicals and future unknown ecological problems.

Bignell says the program isn’t a fluke – it can be replicated and he plans to show the grain producers just that. He is now in communications with grain handlers in other countries as well as meetings in Switzerland. In China, he could see the increasing use of Australian GMO-free ingredients. He is in talks about branding products as South Australian GM-free grain.

The only thing that worries this writer is when he says:

That’s when the real returns will start coming in and hopefully they’re passed on to the farmer.

Hopefully? Bignell, you need to know they will. You need to make sure the farmers profit from these programs or say good-bye to a GM-free status.