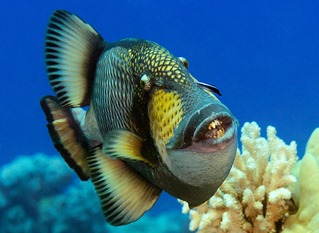 The new reserve is nearly three and a half times bigger than the landmass of the United Kingdom—larger than the state of California—and is home to a stunning array of sharks, fish, corals, and other marine life, says Enric Sala, a National Geographic Explorer-in-Residence who led a five-week Pristine Seas expedition to the island group in March 2012 that helped establish a scientific case for the reserve. (Explore Enric’s posts from the field.)

Announced via the government’s 2015 budget, the reserve represents a bid by the U.K. to thwart the illegal fishing that threatens the species in its territorial waters.  No fishing or seafloor mining will be allowed in the reserve, except for traditional fishing around the island of Pitcairn by the local population, says Sala.

The reserve’s creation is dependent on partnerships with non-governmental organizations and satellite monitoring resources, according to the budget. Those resources are already in place, says Sala.

Thirty percent of the U.K.’s waters around the world are now protected, the highest percentage of any country’s waters on Earth. Although the new reserve will become the largest single marine protected area anywhere, the network of reserves created around the Pacific remote islands by the U.S. in September is bigger in total, at nearly 490,000 square miles (1,270,000 square kilometres).  (Learn about how large marine reserves are protected.)

The Pitcairn Islands are some of the most remote on Earth. The surrounding waters contain intact deep-sea ecosystems, and their coral reefs harbour abundant sharks and large fishes. In March 2015 the U.K. government established the area as a no-take marine reserve—the largest single reserve in the world.

“People know Pitcairn because of the Mutiny on the Bounty, but their real bounty is the rich marine life underwater,” says Sala.

About 60 people live on Pitcairn Island, most of them descendants of the Bounty mutineers from 1790 and their Tahitian companions. In September 2012, in response to the expedition, the Pitcairn Council voted unanimously to create a marine protected area in their entire economic zone, which extends 200 miles (322 kilometres) out from their four islands, three of which are uninhabited. Since the islands are administered by the U.K. as a territory, the new reserve required the support of the British government.

“Pitcairn’s waters contain some of the few pristine coral reefs left on the planet,” says Sala. “They also contain intact seamounts [submerged mountains] and deep-sea habitats that have not been touched by trawling and which harbour many species yet to be discovered by science.”

On the 2012 expedition, Sala and his team discovered several new species of fish by dropping cameras into deep water. A larger effort is likely to discover hundreds of new animals there, he says.

“The Pitcairn Islands have some of the cleanest waters in the world,” Sala says. “And Ducie Atoll is as pristine as it gets,” he added, referring to the most remote of the islands.

Sala’s dive team could see for 250 feet (75 meters) and spied many sharks and a vast garden of pale blue coral that looked like giant roses.

Pitcairn’s residents asked the U.K. government to create the reserve to thwart illegal fishing from foreign fleets, which have been encroaching on their territory. Around the neighbouring islands of French Polynesia, many of the sharks have been fished out. By protecting its natural resources, Pitcairn islanders also hope to attract higher numbers of tourists. (Learn how drones fight illegal fishing.)

Sala calls Pitcairn “one of the best-kept secrets of the U.K.” To get there from Washington, D.C., takes five days on boats and airplanes. “That’s longer than it takes to get to the moon, but it was worth the trip,” he says.

Only about one percent of the world’s ocean is protected in reserves that ban fishing. “There is an urgent need,” Sala says, “to protect such representative examples of ocean ecosystems.”