Home / News / This Bacteria-Infused Concrete Can Heal Its Own Cracks

This Bacteria-Infused Concrete Can Heal Its Own Cracks

This Bacteria-Infused Concrete Can Heal Its Own Cracks May 10, 2015 Tautai
News
Comments Off
Technology 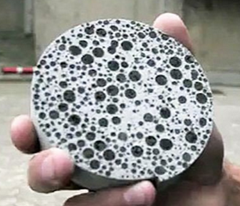 Researchers in the Netherlands have invented a bacteria-infused concrete that is able to patch up its own cracks.

Even such a solid material as concrete is prone to cracking, which inevitably leads to structural degradation and thus limits the service life of constructions. Now, two researchers at Delft Technical University have found an innovative solution for this problem. Microbiologist Henk Jonkers and concrete technologist Eric Schlangen have created a ‘bio-concrete’ with built-in limestone-producing bacteria that make it possible to seal small holes and cracks in the material.

Normally, the concrete has micro-cracks with a width of just a few millimeters, which are in compliance with the concrete quality standards. However, over time, rainwater, which contains dangerous chemicals, leaks in these cracks and corrodes the concrete, as well as the steel that reinforces the structure.

“For durability reasons – in order to improve the service life of the construction – it is important to get these micro-cracks healed,” Dr. Jonkers told BBC News.

The researchers decided to use this corrosive rainwater to their advantage and added so-called alkaliphilic bacteria and a calcium-based feed in a form of granules into the concrete mix. When these granules are activated by water, the bacteria consume the feed and combine calcium with oxygen and carbon dioxide, forming limestone, which patches up the crack.

Thus, constructions exposed to wet conditions, such as highways or tunnels, would be a perfect fit for this innovation.

Lab tests have shown that the bio-concrete was 10 times more effective than other similar methods. According to Dr. Jonkers, the innovative material was able to heal the cracks with a width of 0,5 mm, which is two or three times greater than the usual width allowed according to industrial norms.

Now, the challenge is to launch the large-scale production of the self-healing concrete at reasonable costs.

“Now we are upscaling. We have to produce the self-healing agent in huge quantities and we are starting to do outdoor tests, looking at different constructions, different types of concrete to see if this concept really works in practice,” Dr. Jonkers explained.

The researchers are currently working on the improvement of the self-healing system and reducing the costs. It is expected that the improved version will be ready in six months, while the innovative material will come out in the market in about four years.